When City of Bloomington staffer Nancy Hiestand retired at the end of July, friends and colleagues presented her with a cake in the shape of her circa-1913 Arts and Crafts–style house. The architectural confection, built entirely of edible materials, was not just visually striking; many guests came back for seconds.

A scale model of a historic house rendered in cake is unusual. Odder still is that this one was created not by a full-time baker, but by a retired professor of public policy at Indiana University’s School of Public and Environmental Affairs (SPEA).

The cake maker in question, Edwardo Rhodes, 69, was born in the Philippines to a Chinese mother and an African-American serviceman from rural Alabama. He grew up in Pittsburgh, Pennsylvania, and attended Princeton University on a scholarship, earning a bachelor’s degree in East Asian studies. After graduating magna cum laude, he worked for New York City Mayor John Lindsay as an investigator in his anti-poverty program, followed by four years as a United States Navy officer on the West Coast and in Vietnam. “I was a tourist in Vietnam,” he says. “I basically did a relatively safe job in hot weather.”

In 1972, Rhodes went to Carnegie Mellon University on a fellowship where he graduated with a doctorate in urban and public affairs. “My life is a series of lucky breaks,” he says, modestly discounting his academic achievements.

After teaching at the State University of New York Buffalo School of Management, he came to SPEA in 1985 and stayed for the rest of his career. Also on his résumé are stints as a Brookings Institution Economic Policy Fellow and a member of the national board of directors for Friends of the Earth. At IU, he chaired Myles Brand’s task force on diversity and served as vice provost for academic support and diversity.

Where does cake making fit in? When Rhodes was 12, his mother became temporarily bedridden after giving birth to the last of five children. Rhodes took over cooking duties and found that he enjoyed the job. During graduate school, he agreed to bake a wedding cake for a friend and he’s never stopped. He doesn’t bake professionally but makes his elaborately themed creations for friends. “It makes me and them happy,” he says. A cake made to look like a treasure chest. Courtesy photo 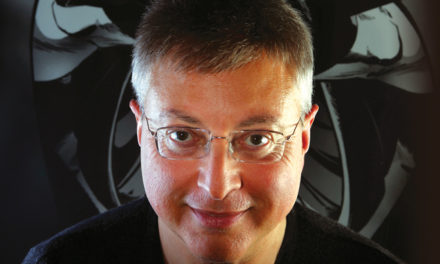