The Media School at Indiana University, established in July 2014, began under a cloud. School of Journalism faculty, students, and alumni were unsure what the move would mean once the school was no longer situated in Ernie Pyle Hall and was taken under the umbrella of the College of Arts and Sciences. Founding Dean James Shanahan understood their apprehensions.

“If I were in their shoes and my school were being merged into something else or changed, I would have concerns,” he says. “So our main job was to get the school up and running, get the faculty and technology in place, and get all the moving parts organized and managed.”

Shanahan, who started in May 2015 and is now well into his second academic year, says things are falling into place. “Now that we’re here, the objections and the reservations have, it seems to me, drifted away,” he says. “One of the main things we did last year was talk to alumni, and the vast majority have been very supportive.”

Shanahan, 56, came to IU by way of Boston University, where he served as a professor and associate dean in the College of Communication and where, he says, he was perfectly happy.

“In fact, my first reaction when IU approached me was ‘Why would I go to Bloomington?’” he says. “But it was a great opportunity to be a dean, and what made this even more special was the chance to be the first dean of a school.”

He says that while he and his wife, Lisa, find Bloomington to be much like other college towns, one thing did surprise him: “It’s not at all adherent to the stereotypes of Indiana that one would have from living on the East Coast.”

Shanahan was born in New Rochelle, New York, and grew up in Redding, Connecticut. He’s played jazz piano since he was 14 and just as he was leaving Boston, the James Shanahan Trio put out its first CD, Bright Atlantic. He says he hasn’t played much since moving to Bloomington; he’s been busy working. But, he says, he would love to connect with other local musicians.

In September, Franklin Hall was rededicated as home of The Media School. Shanahan says the presence of IU President Michael McRobbie, Executive Vice President and Provost Lauren Robel, and other administrators, as well as students, faculty, staff, and alumni, demonstrated the support behind the new school.

“I think it’s going well,” he says. “It’s like an airplane. First, you get off the ground. Then you start climbing.” * 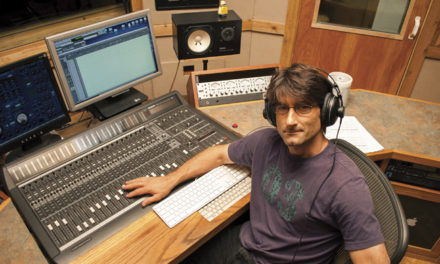