To put things in perspective, when Ron Hafft began working at Indiana University Libraries, the Beatles had recently performed on The Ed Sullivan Show. “I thought I would work here for a couple of years,” he says. Last summer, Hafft, who is now the library’s computer coordinator, hit the 50-year mark.

The 73-year-old Versailles, Indiana, native came to Bloomington in 1964, planning to become a high school English teacher. He began working at the university’s library, then located in Franklin Hall, as a part-time stacks page, finding the books undergraduates wanted to check out among the library’s nearly one million volumes. Graduate students and faculty were allowed to search the stacks themselves, Hafft notes, but not undergraduates, in part because the stacks had glass floors and several stories, and most women wore skirts back then.

Times changed, and when the library began staying open till midnight, Hafft became the full-time circulation night supervisor. A big step for the university—and for Hafft—was the construction of the new library at East 10th Street and Jordan Avenue. With its opening, he became the supervisor of a collection that grew to 10 million volumes.

Hafft cites the change from print to digital as another major library development. Computer workstations replaced the card catalogue, and he directed the implementation of automated checkout, managing a team that barcoded nearly 2 million books over an eight-week period. Financial changes also occurred: Hafft orchestrated a pay system for interlibrary loans and student printing, both of which had been free.

While there have been a lot of changes, Hafft says his reason for staying with the library has never altered. “Each year, a new batch of students comes, and I’ve always enjoyed working with them,” he says. Today’s students are a little different, he notes: “They bring computer skills, know Google, and think they have everything they need.”

Teaching students to find and evaluate information is a big part of why Hafft enjoyed working in circulation for 32 years. Even in his current position, he deploys computer hardware and teaches staff the software.

Upon reflection, Hafft notes that although he interviewed for teaching jobs, he never found a match as good as the one he already had at IU Libraries. “And I did teach.” he says. “Just not in a traditional school.” 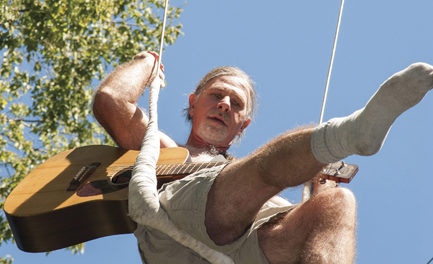