As a successful writer and the disabilities editor for The Mighty, a website for people with health challenges and disabilities that has more than 2 million registered users, Karin Willison defies what people think they know about the lives of disabled people.

Willison, 41, lives with cerebral palsy, the result of brain damage at birth. The disability impairs her movement and she needs assistance to perform many daily tasks. But she lives in her own home, travels for several weeks a year, and writes to inspire others. “I want to help people understand more about disabilities and about all the things that people with disabilities can do,” Willison says.

In her candid blog, Free Wheelin’, Willison writes about living and traveling with a disability. Non-travel topics have included experiencing a home invasion and leaving an abusive marriage. Other posts are more inspirational, such as one about riding an all-terrain wheelchair at Indiana Dunes National Lakeshore. “I use writing to work through my emotions,” Willison says. “I think I write more openly now about various things that I deal with.”

Willison graduated from Bloomington High School North in 1995. While a student there, she wrote an article about her experiences with service dogs. “I won an award for the article and that inspired me to keep going,” she says. At Stanford University she earned a bachelor’s degree in English with a creative writing emphasis. After graduation, she remained in California, writing and editing for websites. An early adopter of voice recognition software, Willison dictates first drafts, then revises on a computer.

In 2004, she met the woman who would become her wife, but Willison says the relationship became abusive and her wife began undermining her attempts to have a life outside the home. Things changed in 2010 when Willison hired a caregiver to accompany her on a trip to New York City. “Traveling helped me find myself again,” she says. Writing about it was a natural extension. “I wanted to show what a healing and empowering experience it can be, and also to give people practical tips for traveling with a disability,” she says. In 2014, she launched her blog.

Willison returned to Bloomington four years ago. She lives with four large dogs, one of whom, Aria, is a service dog she trained herself. She takes three or four trips a year. This fall she saw Hamilton on Broadway. “I just kind of keep going,” she says. “I feel like it’s just about that determination.” 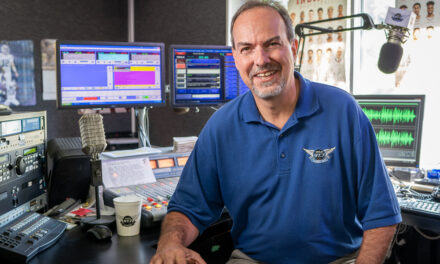