WFHB-FM’s live monthly music broadcast, Saturday’s Child, aired for the first time in March 1994 from the Rose Firebay at the John Waldron Arts Center. According to host Dan Grundmann, WFHB’s chief engineer Jeff Morris approached him with the idea of airing a live performance at a public venue. The two thought if it worked out, it could become a regular show. Now, 25 years and 300 shows later, Grundmann says Saturday’s Child has “become an institution in our local musical community.”

The volunteer-driven program airs on the second Saturday of the month and is now held in the Monroe County History Center auditorium. Grundmann says the “consistent and loyal audience” generally hovers around 30 to 40 people who come to watch the performances, along with his live interviews with the artists, for free. “I like to say that it’s ‘no charge except for the charge you get from the show,’” he says.

Flautist Grey Larsen volunteered to play at the first show back in ’94. He returned for the show’s 25th anniversary celebration in April, along with alternative country performer Merrie Sloan and jazz quintet Tales from Under. That lineup reflects the musical diversity of the artists who have appeared over the years, says Grundmann. Performers have included several Grammy winners, such as opera singer Sylvia McNair, Native American flute player Robert Mirabal, and guitarist Jason Wilber.

“It’s never been a problem to recruit people to play,” says Grundmann, noting that when he put out the call for the 25th anniversary broadcast, positive responses came quickly. “I think it’s indicative of the community spirit that a lot of our local musicians have and the respect they have for WFHB.”

That community spirit will be on display when artists from the Bloomington Blues & Boogie Woogie Piano Festival grace the Saturday’s Child stage on August 10 (see story on page 30).

To hear the 25th anniversary broadcast and for more information, visit wfhb.org/tag/saturdays-child. 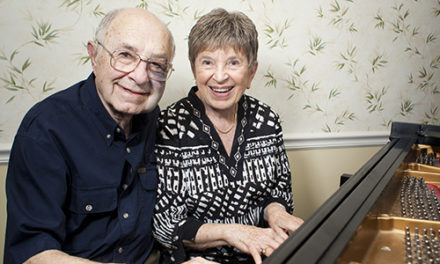