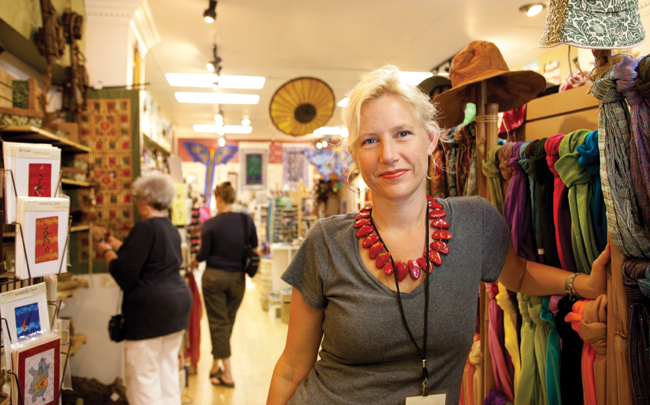 Each semester, when IU Department of Apparel Merchandising & Interior Design professor Mary Embry would bring up fair trade at the end of her international commerce class, students would react with shock and confusion about the conditions of modern manufacturing.

“They’d say, ‘We are soon-to-be graduates going into this industry, and you’re telling us we are making the world a poorer and worse place? Why didn’t someone say something sooner?’” she recalls.

Hoping to make students more aware of fair labor practices and to offer the broader Bloomington community an opportunity to promote fair trade, she persuaded the director of the Indianapolis nonprofit Global Gifts to set up a store here in town. Opened in 2009 at 122 N. Walnut, the shop sells goods from around the world that empower global communities through living wages and sustainable production practices, says Embry, who serves on the store’s board.

For example, Global Gifts carries jewelry made by Imani Workshops in Kenya, a women’s cooperative connected to the IU School of Medicine’s Academic Model Providing Access to Healthcare (AMPATH) program addressing HIV/AIDS (see story in Bloom, October/November 2010 or click here). There are also picture frames made from recycled bike chains by women artisans in Moradabad, India; purses crafted from old tires in Nepal; and “Poo Paper” made from elephant dung in Sri Lanka (a top seller!).

Due to its nonprofit status, Global Gifts is able to rely on volunteers as salespeople (a topic of some controversy among downtown merchants competing for business on the Square). Between 50 and 70 volunteers have been helping run the operation, which Embry points to as evidence of the appeal the project has for community members.

The store also has paid staff, including manager David Debikey, formerly of Bloomingfoods. Any profits go back into fair trade initiatives, which Embry helps to organize through Fair Trade Bloomington, a nonprofit organization she founded to help local businesses get involved with fair trade.

Embry is also pleased that she is now able to connect so many students to the fair trade movement through service-learning projects and volunteer opportunities, such as promoting a “fair trade coffee break” throughout Bloomington, facilitating a textile exchange with weavers in Guatemala, and arranging Global Gifts’ window displays. Describing herself as a “global citizen,” she explains that the store’s purpose could be termed glocal: “It’s a merging of local and global concerns,” she says.