White Violet Center for Eco-Justice: A Place to Reconnect With the Land 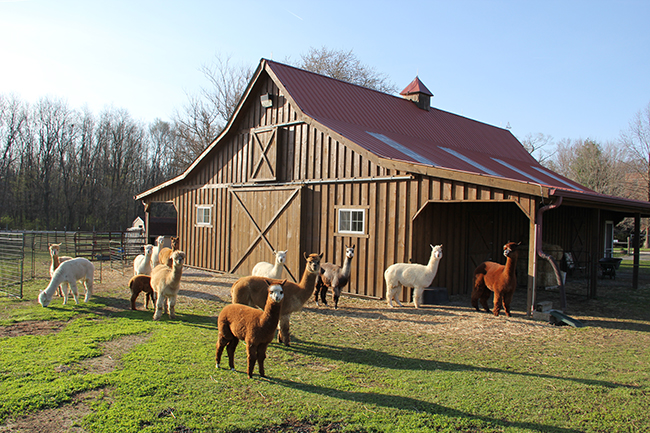 Xavier and Dominique are two of the 37 alpacas who live at the White Violet Center for Eco-Justice in Saint Mary-of-the-Woods, Indiana, just outside Terre Haute. Their religious names hint at the background of their keepers, the Sisters of Providence, a Catholic religious order. The congregation was founded in 1840 by Saint Mother Theodore Guerin, a French immigrant who was canonized in 2006, becoming Indiana’s first saint.

As a species, gentle alpacas are also rather saintly. “They don’t really bite and they have a soft kick, so I can safely send kids out to meet them,” says herd manager Tracy Wilson, who, like many of the people who work at the White Violet Center these days, is not a nun. “Alpacas are curious, and they like human interaction, though they don’t like to be petted. I’m smitten with them.”

And alpacas quite literally tread softly on the land: their soft-padded feet don’t compact the soil, and when they graze, they nibble only the tops of grass rather than pulling it out by its roots as goats and sheep do. So they are good ambassadors for the center’s sustainability mission. White Violet aims to foster both social justice and a reverent use of natural resources. It maintains beehives, a berry patch, and a large organic garden. Produce is sold at farmers’ markets and distributed through a CSA (community supported agriculture) program. There are orchards and a classified forest with nature trails on the White Violet grounds.

There is a lot to see, but the alpaca herd is one of the biggest draws. Alpacas, members of the camelid family, were domesticated several thousand years ago in the Andes Mountains for their fine, silky fleece. The White Violet herd is sheared every spring, and hats, socks, and other products woven from the fleece are sold at a gift store next to the church that holds a shrine housing the relics of Saint Theodore.

Information for visitors can be found at WhiteViolet.org.