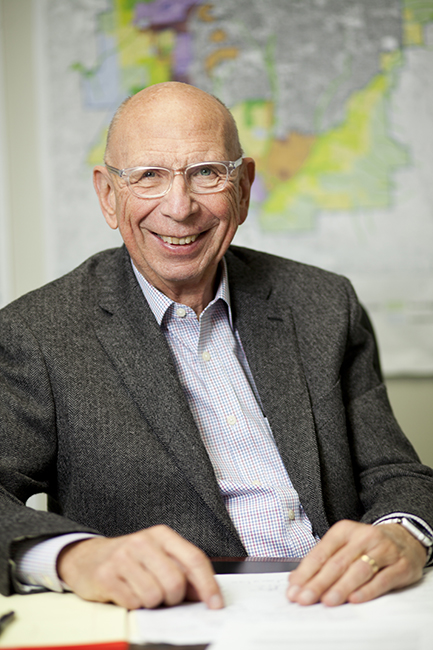 Lynn Coyne can pinpoint a transformational day in his life in the summer of 1958. He was 14 years old, and his father, a Westinghouse manager, had recently been transferred and had moved the family from Pittsburgh, Pennsylvania, to Bloomington. “It was a beautiful, sunny day, and I was walking on the [downtown] Square, on the east side, heading south,” Coyne remembers. “A man in a suit and tie looked over at me and said, ‘How ya doing?’”

The incoming high school freshman was stunned. “I’d never had a strange adult speak to me in my life,” he says. “In Pittsburgh, people averted their eyes when you encountered them on the street. I thought, ‘This must be some special place. People are so friendly.’ Ever since then, I say ‘hi’ to everybody I see.”

That’s a lot of people, given Coyne’s lifetime of Bloomington community involvement, including his work as an attorney, assistant vice president for real estate and associate counsel at Indiana University, and, currently, at age 71, president of the Bloomington Economic Development Corporation (BEDC). “Bloomington is truly a city of opportunity,” he says. “I’ve never wanted to live anywhere else.”

Coyne earned his bachelor’s degree in East European languages and literatures from IU and was awarded numerous citations for his service, mostly in Japan, as a Russian linguist with the U.S. Air Force. He returned to Bloomington, earned his law degree, and took an unusual side job when he first started practicing law. “I was the first orderly at Bloomington Hospital,” he says. “It was a wonderful experience. I learned so much from the nurses about doing a good job, about life, about people in difficult situations, people under great stress. You learn quickly about what’s important in life, and it helped shape me and how I think about things.”

He even married a nurse, his German-born wife, Ute. Sons Erik and Bryan both graduated from Bloomington High School South and have gone on to successful careers.

Coyne retired from IU in 2013 but was called upon to return to the BEDC where he had previously served as a board member. “It’s a wonderful opportunity to bring all of my background into play,” he says. “Selling Bloomington is easy for me because I’m passionate about it.”