Michael Hamburger says he enjoyed being the “seismologist in residence” as a science fellow in Washington D.C. While there, he advised top foreign policy experts, contributed to policy remarks by the U.S. secretary of state, and worked with religious groups involved in climate advocacy.

In August, Hamburger, 62, a professor of geology at Indiana University, finished his yearlong stint as a Jefferson Science Fellow, a competitive program where scientists work as science advisors on foreign policy issues with the U.S. State Department and the U.S. Agency for International Development. One of 11 fellows chosen nationally, he was the first selected from IU Bloomington since the program started in 2003.

Several weeks before returning to Bloomington, Hamburger described his year as exhilarating, refreshing, and quite different than academic life at IU. “Sometimes I feel like I’m visiting a foreign country,” he says. “The culture is rather unique compared to the academic world. I wear a suit and tie every day. It’s a very hierarchal organization with a very strong sense of commitment toward shared goals and ideals.”

Hamburger, who worked in the State Department Office of Religion and Global Affairs, divided his time between climate change and environmental issues and work related to his expertise in natural disasters and earthquakes. While there, he started projects relating to disaster risk reduction. “I worked on engaging religious-based organizations to help reduce hazards related to earthquakes and tsunamis and other disasters,” he says. He used the half-dozen earthquakes that occurred while he was there as “teachable moments,” arranging briefings to help officials understand short-term impacts and long-term hazards facing countries hit with earthquakes.

Hamburger says much of his work involved interpreting scientific information so foreign policy experts could incorporate it into policy. He also assisted State Department leaders in crafting remarks for policy forums, gave a presentation on natural disasters to the National Academy of Sciences, and helped frame diplomatic communications to embassies on issues related to wildlife trafficking.

While in D.C., Hamburger attended several White House and United Nations events and met ambassadors, members of Congress, and his favorite — Bill Nye “The Science Guy.”

“It’s very exciting to be in the swirl of the excitement of the foreign policy world,” says Hamburger, who lived in a Capitol Hill neighborhood and biked every day along the National Mall. “I’m actually hoping to bring some of the work I’ve done here to inform my research and teaching. 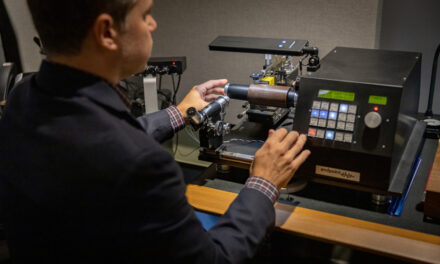